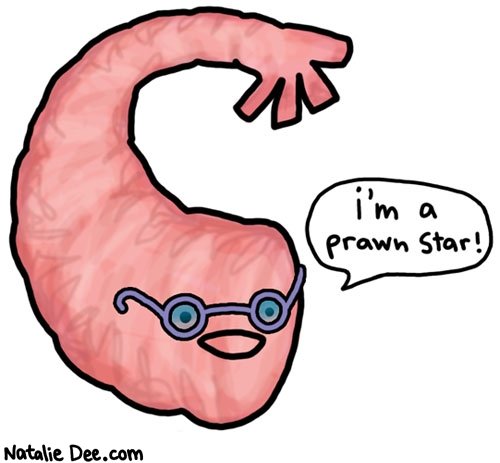 A few years ago, when we lived in the Whitsundays, one of my besties Nikky and I went out in Airlie Beach for the night.  I’d just broken up with this guy who was incredibly immature, though I’d struggled with the decision for a while.  After I’d finally made up my mind, Nikky hurrah’d me then said that the boat was leaving for the mainland in half an hour, and we could totally go party in town for the evening.

It was a great night, but the reason I bring it up now is this: at one point, we walked into a club.  I then stopped, took half a step back, and asked Nikky, “Have our standards dropped living on the island, or are all the guys in here just incredibly good-looking?”.

Walking into a club in Russia has the absolute opposite effect.  For that reason, I’ve dubbed it the ‘land of the prawn‘: a lot of guys are absolutely ripped, but they look like they’ve been smacked around the head with a sack of potatoes.  I don’t really understand it, as obviously the women here are stunning.

Yesterday I was co-hosting a English-language speed-dating event for work.  Yes, really.  One of the first activities students had to do was to divide into men and women, then make a poster saying what their ideal partner would be like.  The women presented first, and they’d filled the poster with adjectives – kind, brave, honest (“He should tell me he’s going to leave before he does”) and strong (“He needs to be strong enough to look after his woman” – I managed not to tear my hair out).  The men on the other hand filled most of the poster with a picture they’d drawn of a woman, with a few adjectives around the edges.  They presented it, and these were the adjectives they chose, in order: skinny; beautiful; blonde; tall (one guy looks me up and down then says “around 175cm” – I scurried away); blue-eyed.  Personality, anyone?  Another guy stepped up and said “intelligent” was the most important, which won him instant favour with all the women in the room haha.

After the students started their dates, I didn’t have much to do, so drank champagne and talked with my colleagues.  I got talking to one of the school’s ‘course consultants’, and commented on what the students had written on their posters.  She said that it’s because there are so few men compared to women in Russia, so men can look however they like and demand whatever they want, and they’ll still be considered ‘a catch’ (I feel like there’s a prawn pun in there somewhere).  Women on the other hand have to out-compete each other, which is how come you have women walking around in full make-up, up-to-the-minute fashion and heels every day.  I saw a girl in what must have been 6″ stilettos slip on the ice the other day, and seeing her try to rescue herself when her shoes had so little surface area to deal with was amazing.

I then said that I didn’t think I could date a Russian man, and not for the superficial reasons I’ve just banged on about, but because of the sheer cultural differences.  Here, ‘feminist’ is said in the manner of a swear-word (I’ve got a blog-post on this coming up soon 🙂 ), and women are expected to want marriage, babies, and to stay at home while their husband’s the bread-winner.  Of course, in none of this post am I talking about every Russian, but the generalisations largely hold true.  The course consultant asked me what it was like in Australia then, and I said that expectations had shifted to be much more equal.  She said that at home, her boyfriend did half of everything, and that they took turns – but that he was the only Russian guy like that!  Haha I guess it’s lucky I’m so awesome when I’m single 🙂

Anyway, we went out for Lana’s birthday last night, and I’m pretty sure it’s time for me to go back to bed.  Awesome.