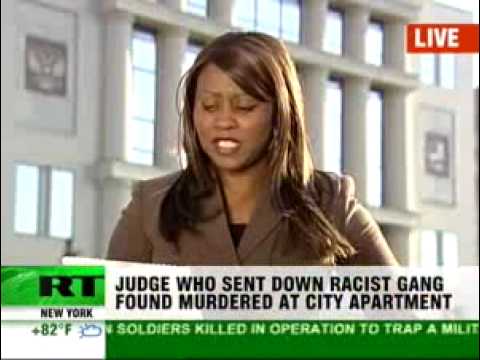 I’d like to take a moment to talk about racism, and depressingly, as it’s Australia Day, it’s entirely appropriate.

Firstly, I realise the text in the featured image might be difficult to read: it’s from Russia Today, and says “Judge who sent down racist gang found murdered at city apartment.”

Russians are renowned for being racist.  There were the fights during the Euro Cup, people are warned not to come here if they’re ethnic, and violence is often racially-motivated.  You’ve also got things like this (there are hundreds of videos like this on youtube):

I was waiting with one of my students one day, as her parents were running late to pick her up and I didn’t want her waiting outside the closed school at night-time.  This was when I’d only been here for about a month, and so she started telling me things I needed to know about Russia.  The big thing was to ‘stay away from people from the Caucasus’ and the Stan countries.  I objected to this and she said that no, ‘it’s actually a big problem’ (and yes, my students do say ‘actually’ a lot!!).  “They don’t like Russians and we don’t like them.”  She asked me to be careful.

I think I’m sheltered from this a fair bit, because I’m a white girl who most people assume is Russian.  I do walk through the city late-ish at night after I get home from work though, and I’ve never been hassled – other than being hit on – by ‘white’ Russians (I was trying to think of a way of saying that that wasn’t also the name of a delicious cocktail).  I am definitely not happy to walk in the midst of a group of ‘black’ Russians though.  (I feel like I’m stuck with the drink dichotomy now unfortunately: recipes at the end), as they’ll ask me for money, abuse me in Russian, or get way too hands-on.  I just don’t understand!

This racially-based discrimination is particularly evident at public events – as I said in my New Years’ post, at the crowd barrier I magically got through, while non-European-looking people were being effectively kept outside, or at least delayed in the extreme.  It’s interesting writing from St Petersburg, because it isn’t as conservative here as it is in ‘real’ Russia, the smaller cities and towns that dot the place.  On the other hand, to my eyes it’s less cosmopolitan than gigantor city Moscow.  The city football team here is Zenit, and their fan-clubs publish things like this:

“We’re not racists but we see the absence of black players at Zenit as an important tradition,” Zenit fan club Landscrona said in a letter…  “It would allow Zenit to maintain the national identity of the club, which is the symbol of St Petersburg…  We only want players from other brotherly Slav nations, such as Ukraine and Belarus as well as from the Baltic states and Scandinavia.  We have the same mentality and historical and cultural background as these nations”.  (More here: ‘No black or gay football players please, we’re Russian‘.).

Now, as it’s ‘Racist Freebie Day’ today, let’s compare Australia (and also, does anyone else notice the huge contradictions in this poster??  People who ‘aren’t citizens’ are demanding ‘citizens day’.  Eye roll.):

Haha as I understand it, hate crime legislation covers victimisation of an individual, but I’m hoping he’ll go away so that this conversation can stop!  Must.  Not.  Engage.  Stupid.  Racists. (To me, all racist people are by definition stupid – I’m a racistist.)

The thing that really bothers me is that peoples’ news feeds today are full of parochial rubbish like this because of Australia Day – the day when racists don’t get reprimanded for airing their maleficent nonsense.  It just disgusts me.  I see it as symptom of small-mindedness.  In a way it’s sad – people like that will never experience a full life, because they can’t open their minds or eyes to anything out of their comfort zone.  But man do I wish such sadness wasn’t so prevalent.

I’m a little too depressed to continue talking about this issue, as to my mind it shouldn’t even be one – I treat people the same until if and when they do something that I find objectionable, and then I disengage and leave them alone – it’s that easy. As such, I’ll sum up by saying that sure, there are social problems in Russia – but it’s far from the only place.

I know quite a few ‘Russian-themed’ cocktail recipes, as I was basically drinking anything related before I came over here. Haha maybe I’ll make it a feature? In the meantime, here are recipes for Black and White Russians:

There are LOTS of variations of each of these recipes, so just experiment and find out which you like best.  Haha you can also make a ‘blind’ Russian by substituting the cream in a White Russian with bailey’s.  Perhaps that’d be better for everyone involved…