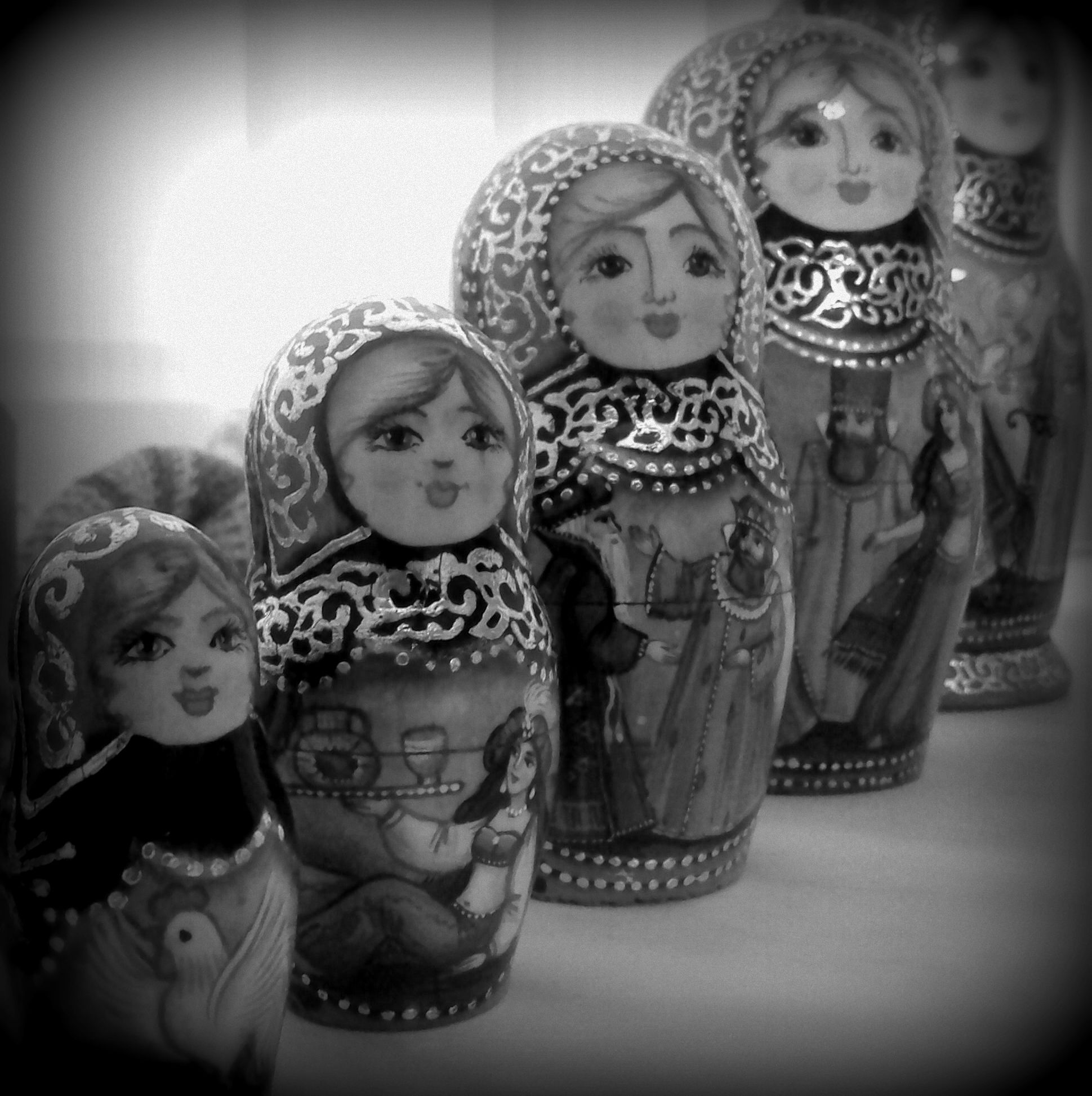 After a day’s sleeping after NYE, I decided to make use of my free time by heading out to the Hermitage for the day.  It was January 3, the first Thursday of the month – the day when it’s free for everybody to go to the Hermitage.  Clearly I didn’t think this through.  This is the line to get into the courtyard to GET to the line for the Hermitage:

Of course, that didn’t stop your mates in a sleigh from driving straight through the middle of the line at full speed:

I decided to go and visit some matryoshka dolls I’d seen when buying Jess’ xmas present.  That day was around -26 degrees and I’d dragged Les out with me to go and look for something cute and Russian to send to Jess via Oksana, who was going to Australia that week (thereby bypassing the Russian non-postal service).  We wound up at the antique/souvenir fair opposite the Church of Spilled Blood, where you can apparently buy matryoshka with anything on them, from US Presidents to Harry Potter.  I ended up finding some with cheburashka (<3 cheburashka – it’s an adorable kids’ cartoon):

The lady at the stall where I got the cheburashka-matryoshka dolls was ridiculously sweet, and spoke the most adorable Renglish.  I asked how she could stand to have her gloves off in the freezing weather, and she said that the day before was even worse – then she had to drink cognac to stave off the cold!

While at the stall I saw the most beautiful matryoshka but decided I definitely couldn’t afford them.  Nevertheless, after the Hermitage was clearly a no-go, I went to visit the matryoshka and realised they had to be my Russia souvenir :).  The lady was so stoked to see me again that she gave me an epic discount (so they cost me $100 rather than $220) because “nice people, nice prices”.  She even gave me a little magnet with the Bronze Horseman (symbol of St P) as well.

After this I went for a quick warming stop in Dom Knigi (<3), whereupon exiting I set off the beepers.  One of the guards pulled me aside and I showed him my bags etc, but then he wanted something else which I just couldn’t understand.  I said as much, he asked where I was from, I said Australia, and he said “that’s ok then, just go”.  Lol.  Positive racism?

Post food-orgy at Chainaya Lozhka I was walking down Nevsky when I spotted the Christmas Fair.  I decided to go for a quick meander, and I’m so glad I did!  All today’s photos are rubbish sorry, but I think you get the idea:

This was the IKEA stand at the market (Рождествестая Ярмарка).  Of course there was an IKEA stall – what’s more festive than that?

All of the stalls were so sweet:

There was a stage with performances, including some dancers doing some kind of American cowboy-style country dancing, which was pretty hilarious.  Traditional, much?  Next up was a young Russian guy dressed up as Santa, singing a song about how girls are always breaking his heart (I haven’t included a translation because some of the lines are a bit tricky).  I particularly enjoyed his dancing haha:

What happened next on stage just made me laugh.  There’s a pretty famous Russian ex-pro-boxer, Nikolai Valuev, who looks like the hardest dude in the world.  He’s 7ft and just so bad-arse-Russian-looking!  He’s in a series of ads for МТС, one of the telephone companies here, and every time I see a billboard it just makes me happy:

Anyway, the gentleman in question, who’s now a member of the St Petersburg Duma, appeared on stage, and stood out just a smidgeon:

The lady in the middle of the above photograph is an artist, and she was to run a ‘master-class’.  She and Valuev would do a painting together of one of St Petersburg’s bridges:

What I find very interesting actually, is that if you got a famous man on stage to do a painting in Australia, firstly, they wouldn’t be a boxer.  Secondly, they’d do the painting “ironically” – they’d be making jokes about themselves or their deficiencies.  Valuev was obviously trying very hard to do a good job.  This is one of my favourite things about Russian people – they don’t take the piss or do things ironically, they either don’t do something or they really apply themselves to it.  It’s also one of the big differences I notice between Russian and Australian men: here, guys unashamedly do art, or dancing, or singing, and there doesn’t seem to be any kind of stigma against it.  I love it!  Actually, this reminds me of something I read in Lonely Planet Russia:

The Academy of Arts Museum is… “guarded by two imported Egyptian sphinxes said to be about 3500 years old. Boys would live in this building from the age of five until they graduated at age 15 – it was an experiment to create a new species of human: the artist.”

Russia’s had a lot of famous artists – quite a number from St Petersburg – and the art here is amazing.  I like that it’s such an integral part of cultural history 🙂

Anyway, I’ve segued long enough to stop laughing about Nikolai Valuev.  This is what happened after he finished the painting of the bridge: the emcee asked him to go and pick a card from the xmas tree (yolka) on-stage.  Inside was written a child’s xmas wishes.  Nikolai read them to the crowd and then agreed to make all of them come true: see, big scary Russians aren’t so scary after all 🙂