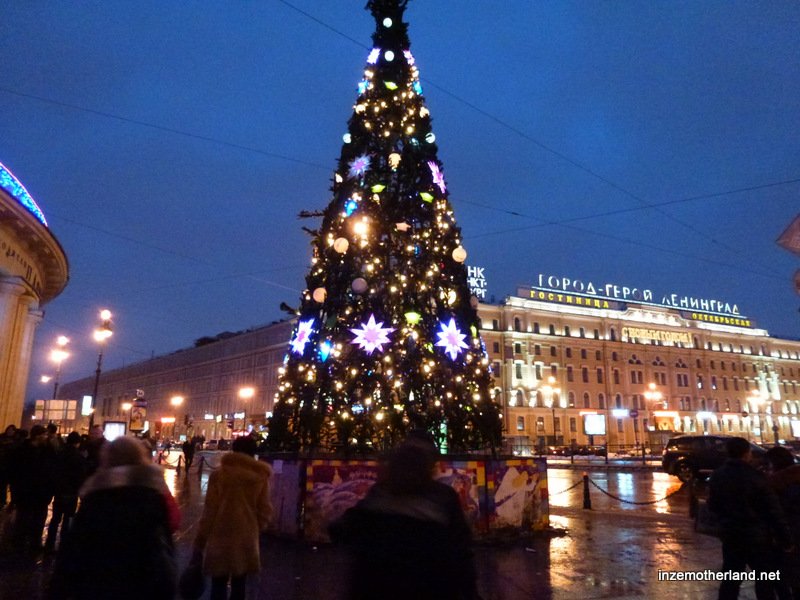 In which the London Philharmonic Orchestra playing a traditional Russian folk tune accompanies “New Years’ in St Petersburg in 2 minutes or less”!

I’m a bit special sometimes and couldn’t get the music to stop at the right place.  And yes, the tetris theme song, korobeneiki, is indeed a Russian folk song 🙂

The evening started at 3pm, when I met Karie for a celebratory “we’ve been in Russia for four months!!” drink.  Aka a “our sentence is half over!!” drink.  Karie came prepared – she’d prepared a list of questions to ask me about my time in ze motherland thus far:

A couple of hours later, I went back to mine.  Les came over and we watched Ironiya Sudby, the Irony of Fate, which one is required to do on New Years’ Eve in Russia.  We also drank Russian champagne (made in St Petersburg, so I know it’s not real ‘champagne’ blah blah blah) and ate USSR icecream:

Next it was time to brave the streets (at just a little after midnight – oops!):

There were a lot (LOT) of police around, but this one made me laugh the most.  “It was this big!!!“:

It’s not Christmas until you’re in a photo with a Russian Santa.  He even gave me lollies!!!:

We finally reached Palace Square at around 1am.  There was a barrier to get in so I decided to go to the bathroom before heading into the main square.  This was the line for the bathroom (the caravan with lights on):

Screw that!  Les and I went back to the barrier.  There, police were fairly obviously letting families in first, and pushing away any Stanis (Tajiks etc) from the barrier.  I got through with the magic of crowd osmosis.  Les got in a while later, after enduring the pat-down required of everyone who wasn’t me.  This was the stage:

Haha I should add that it was the singing and dancing of other people – the square was very very icy, so I tried insofar as possible not to move!  As it happened, I was standing next to a guy whose jumper said this:

Here’s my winter coat in front of the Winter Palace!:

At about this time, I got a rather interesting text from one of my friends J.  He’d called me just before, saying “hey Laura, I can’t really talk right now if you understand what I mean.”  I asked him – “you realise that you called me, right?”.  Hey, who doesn’t call someone to say they can’t talk?!   He then enlightened me:

I went and found some of the police officers in the square, and asked them where he was likely to have been taken.  They asked what he’d been arrested for, and I said I had no idea, but that he was Canadian and his Russian’s only about the same as mine, so it might be a bit tricky for him.  Either way, none of the four officers had heard anything about it – woot, it’s not New Years’ in Russia until you have a friend lost in the Russian prison system!

Short segueway – on Saturday night it was the company staff party.  I didn’t go, but maaaannnn have I heard some stories.  I think this was my favourite:

Why do all my friends end up in jail or hospital?!?!

The police advised me to keep trying to call J, and if I couldn’t get through then maybe try in the morning.

I’d completely failed to meet up with any of the other people I was supposed to see because the mobile networks were so busy, so it was just about time to go.  These are some of my favourite photos from the walk back through the city:

There were quite a few people about, considering it was 4am:

The only vehicles driving on Nevsky Prospekt were emergency ones:

To be honest though, there wasn’t much ruckus, just people having a good time.  These people started a concert at a bus stop – a few started singing, and then a massive crowd joined in:

Good luck getting into the metro station, guys:

When we got to my street, Les carried on to Mayakovskaya metro station, and I started walking home.  I’d just received another text from J saying he’d been released, so yay for that.

On the walk home, some group of arseholes surrounded me at the pedestrian crossing and one tried to pinch my… shall we say posterior?  Haha hardly likely to be effective considering I’m a human marshmallow in my winter coat, but I was still pretty cut.  Shortly afterward, I came across two young Russian guys having what appeared to be a hilarious conversation in the street.  They both turned to me to try and win an argument, or something, and next thing you know I’m with a group of Russian students who want to know why I’m walking by myself.  They find out I’m Australian and speak English, and one of the guys starts telling me he’s David Duchovny and he created Tom and Jerry.  Haha famous people were about the extent of his English, but it was pretty hilarious.

Two guys grab one of my arms each and start walking me back to my apartment.  It was actually appreciated, because the street was icy and for once I didn’t fall over!  I was having a great time though, so when we all got to my apartment block and the group invited me to walk to the river with them, I said those fatal words – ладно, давайте!  (~”all right, let’s!”).

Apparently it’s tradition (but I could have completely misunderstood, it was after 5am by this point and a million people were talking to me in Russian at once) to go to the Neva river on New Years’ Eve, and cast in a bottle with a wish.  Best tradition ever?  So, I wilfully polluted, but in the most awesome of ways.  Here’s the bottle with our wishes:

And all of us ready to throw the bottle into the water together:

It was incredibly fun, and we jumped in puddles the whole way back to mine.  Yay 🙂