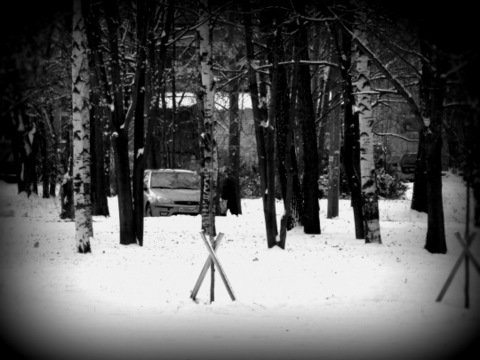 So, as it turns out, I’m still homeless!  As such, I’ve moved hostels, and am here for tonight too—then this hostel’s booked out as well.  I have no particular dramas with living in a hostel, I’ve actually done it on a frighteningly regular basis.  Of course, the fact that six young children just moved into our twelve-bed room kind of puts a downer on it!  Goodbye sleep-in..

On the upside, my room-mate for the past week and a bit has been a Russian girl called Nastya who claims not to speak any English, so every night when I get home we talk in Russian for a few hours which is absolutely great.  ‘Claims’ is in italics because last night we watched the Lion King in English and she asked me to define or translate words for her which she didn’t know—and there weren’t very many such words.  It’s quite fun trying to define an English word using only Russian :).

I’ve been feeling bad about hating Russia so much, about thinking it’s backward, and thinking that life here is incredibly hard.  I figured I was just being a weak and overly-privileged Westerner.  But, last night I had a long chat with one of my Russian friends and she finds it just the same.  Life here is really hard, and they all want to leave: the best thing you can do for yourself, or for your children, is to get the hell out of dodge.  I then spoke with a couple of other Russians, including a guy who has been in the UK for the past five years, and everyone wants a way out.  Haha though granted, EU membership is more attractive nowadays than a Green Card.  I actually got quite emotional when talking with the first friend, saying that I wish I could show her—and the people here in general—what life can be like.  It’s just tragic that 140-odd million people are trapped here in terrible and declining circumstances, which they can’t control or escape.  Though to be fair, if all the crazies were put in some kind of enclave together, that would immediately make everyone’s life at least 50% better!

Okay, so ‘gay milk’.  If you didn’t watch the video linked in my last post, basically there’s been an uproar about a particular milk brand’s cartons, as they feature a rainbow.  This rainbow, as the ‘international symbol of homosexuality’, has been accused of breaching St Petersburg’s ban on ‘gay propaganda’.  I’ve read a few articles about the milk but haven’t heard anything here on the street.  Nor have I really heard anything about Madonna being sued by people whose ‘morals’ were offended at her concert here back in February.  In saying that, homophobia is definitely a thing.  I remember once we were practising ‘giving advice’ in class, and someone made an allusion that somebody else should only date those from their own gender from hereon-in.  The entire class just frosted over.

I decided to take the direct approach (if I was direct before coming to Russia, now I’m downright obnoxious—it’s a terrifying prospect I know!) and ask some of the teachers I work with how they feel about homosexuality and I guess Russia/St Petersburg’s approach to it.  I was particularly interested to know whether they thought it was a nature/nurture thing.  The first two teachers I spoke with completely didn’t care, though they ‘aren’t friends with anyone like that’.  I asked why they thought rights were being reduced and they indicated that maybe it was to do with the Orthodox Church (the collusion between the Orthodox Church and the Russian government is increasingly well-documented).  The third teacher I spoke with I spoke with at quite some length.  She suggested that homosexuality was a ‘growing problem’, and that it shouldn’t be illegal, but all homosexual people should live separately.  Seriously.  I compared this statement to segregation pre-civil rights movement in the USA, and said that that didn’t exactly work out.  She replied that she hadn’t thought of it like that but there had to be some way to get ‘them’ to live together in enclaves.  The word ‘enclave’ was exactly the word she chose.

I then took a different angle and discussed with her how Russia’s crack-down on civil rights is generating out-roar in the West: how Russia is becoming known for Putin’s ‘democracy’, misogyny and intolerance.  I pointed out that it all has great political consequence.  The teacher said that the rest of the world didn’t matter, they should mind their own business and Russia will look after itself.