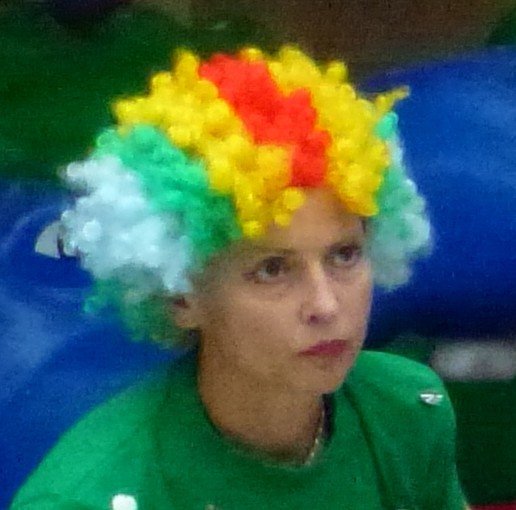 Все сумасшедшие (pt 1)
You can count on it (groan)

My landlady’s in town at the moment, meaning that I come home even later than I normally would.  So, on Tuesday when the opportunity to go out after work came up, naturally I went!

It was a girl I didn’t know’s birthday, and I went with one of the other teachers to the 24-hour florist across the road (there are a very large number of 24hr florists) to help her pick out something.  When we arrived, I couldn’t resist making a purchase for the birthday girl myself:

The possibilities are endless.  Popcorn?  Roast or grill it?  Turn it upside down and plant it?  Basically, I’m pretty sure it was the birthday present of the year.

The last metro back from that island leaves at around ten or a quarter past midnight, so as the witching hour strikes, my friend Naz walks me over to the metro.  To find the doors closed and barred for some completely arbitrary and nonsensical reason (shrug – it’s Russia).  We found a guy who works at the metro and he says he doesn’t know why the metro’s closed, it just is (and yes, he shrugs).  So we have to find me a bus (marshrutka, which aren’t public transport but privately owned kind-of taxi kind-of public transport buses) or a taxi before the bridges open for the night and I’m stranded.  None of the marshrutki are going the right way, a tram turns up (on the tram-line, which is closed at the moment) but is going somewhere random, and the three public night buses that are supposed to arrive do not.  It’s reaching the point where unless I taxi or lada it, I’m going to be stuck for the night.

‘What’s a lada?’ I hear you ask.  (Note that at this point I spent an unreasonable amount of time google imagesing ladas)

Well, as well as being the ubiquitous old-school Russian car, in this particular context I mean it’s a bunch of guys who drive said cars around at night time, working as illegal taxis.  At least, I think they’re illegal.  But really, it’s Russia.  Who knows, as long as you’re bribing the right person?

Anyway, so the ladas start lining up and we go from one to another, trying to find one who’ll take me home for a reasonable fare.  Eventually I find one to get in, with a guy who speaks approximately five words of English and who doesn’t know how to get to my house as he’s been driving for three days.  Needless to say, his lack of linguistic capability in no way stopped him from asking me out.  Oh Russia.

Speaking of bribes, it came up in class tonight (immediately before recycling and its lack of importance) and we had quite the enlightening chat.  Apparently, the standard time at which you pay bribes to policemen is if you’re busted speeding or running a red light.  Considering the motorbikes that scream down Nevsky at what must be well over 200kmh-1, I’d say this is a lucrative business!  My class and I were discussing smart cards and the possibility of going cashless in Russia, so I asked what they normally pay for with cash.  One of the items was bribes, and I said that maybe it would be better to keep it in cash so that it would be off the books.  My class then assured me however that the policemen’s bosses typically get kickbacks on a percentage of whatever bribes are taken, so taking credit cards for bribes would be no issue!

In other news, I’ve started uni (yayyy!).  It’s my third day tomorrow, and I’m going thrice a week.  I think it will be good.
My level of Russian is around high A2 or low B1.  In the Common European Framework for languages, the levels go A1 (beginner), A2, B1, B2, C1, C2 (fluent).  My students are slightly obsessed with getting me to speak some Russian to them, and when I sprung a writing test on some of my B1.1’s today and they said the topic was too hard, I said that I’d do the test at the same time as them but in Russian rather than English.  If they settled and did the writing task, then they could read what I wrote once they’d finished.  Motivation achieved!!!

Anyway, it’s naptime as I’ve another day of uni + work tomorrow, so I shall leave you with the following video.  I may or may not have spent a couple of hours watching videos like this on youtube the other day after someone sent me the link, and it is exactly what Russia’s like.  Enjoy!

Все сумасшедшие (pt 1)
You can count on it (groan)