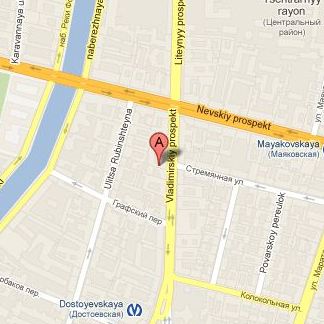 Нет problem.
Not in Kansas anymore

(Along with the Russian for “I don’t speak” and “I don’t understand”, the most common phrase I’ve used the last 48 hours.  And incidentally, the ‘not speaking’ part is out of sheer laziness, because Russians keep asking me directions and it’s shorter than ‘nfi’ )

Well, after a more-than-minor meltdown yesterday toward the end of my “induction” (it definitely can’t be written without quotation marks), resolved partly through massive facebook pep-talks and partly because the more-than-moderately-inappropriate “Chasey Lane” by the Bloodhound Gang came on in a pub I was in (and I was hilariously the only one in the room who understood what the lyrics meant), I’ve had a rather ridiculously effective 24 hours.

This afternoon I found an apartment – the centre of St Petersburg, right near direct metro lines to both of the schools I’m working at, at the moment entirely to myself, fully furnished, and all for about $100 a week.  Outrageous.  Not bad for 48 hours in the country.

I also had training at the second of the two schools at which I’m working.  The staff (and especially my boss, who was good enough to give me an old phone as mine inexplicably doesn’t work in Russia – btw my new number is my old number (starting with 61) + 18 416 246 522) all seem very friendly.  More interestingly, while in the teacher’s room I saw a book about love sayings in English.  I picked it up and flicked to a random page and saw it was all in Renglish – evidently the author had thought they were a lot better at English than they actually were, and didn’t get a native speaker to check anything.  I particularly enjoyed misquotes and the ‘amasing’ spelling.  I flicked to another page and it was the start of a chapter on dating.  It read something like “Dating is very important and what a lot of people enjoy most in their life.  But sometimes dates end badly when one person sexually assaults the other.”  WTF.  Hilarious!

On the topic of Renglish, after finishing work at school #1 I caught the metro to school #2 (which has lost 7 employees in the last month btw) as I was teaching for a couple of hours today.  It was a group of mid-teenagers, with a couple of particularly outspoken students.  One of them, wanting to go to the bathroom, interrupted me to ask “Laura, please, can I come out”?!  Haha.  All I could think about was the Princess Bride and “I do not think that means what you think it means”.  I almost managed not to actually laugh at him, and when he came back we went through better ways of saying what he meant.

I feel like lots has happened but I’m ridiculously tired and am moving house tomorrow, so will keep it brief – I’ve been existing so far pretty much on sushi (who would have thought?  Sushi is HUGE in St P) and overpriced coffee; killed a mosquito approximately 3 seconds ago (get the important facts here people); and seen some pretty awesome things on the street.  The two things that come to mind are one guy doing CRAZY impossible tricks with a football and his face, and a guy outside Burger King trying to hussle people in by shuffling at them.  It was pretty ace.

The other thing that has stood out is how much Russian people love it when you speak Russian to them.  A happy dance would not be out of the question!  Haha and if Russians looked like they do in the movies, that’d be quite the sight to see.

The sky is freaking beautiful here – no photos yet as I’ve been somewhat preoccupied.  I think my first will have to be of the outside of the place I’m living in – the block looks like it should house a meth lab and multiple murders.  Fantastic.

Нет problem.
Not in Kansas anymore