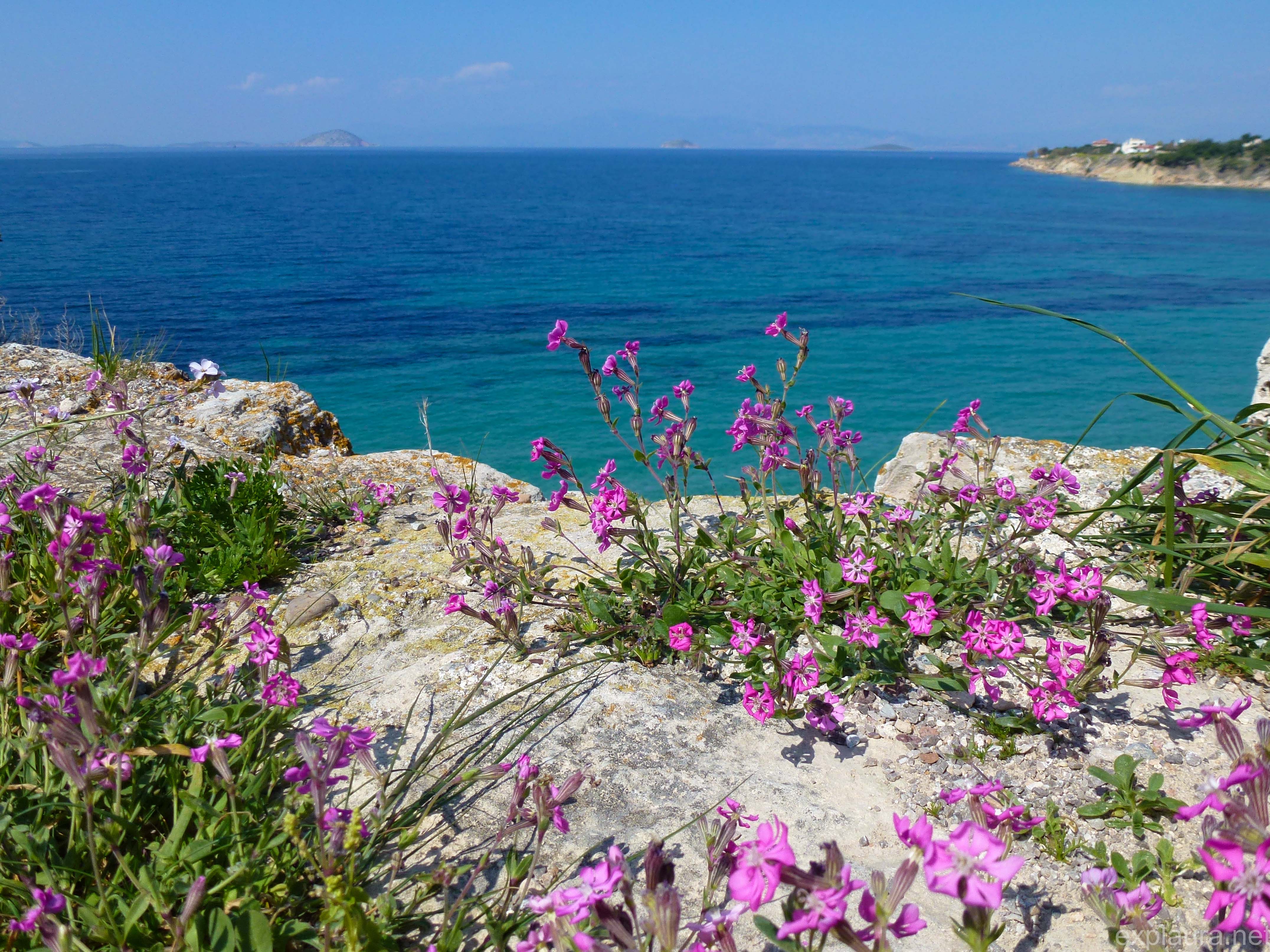 (14/06/14)  Aegina is a gorgeous little island, about an hour by ferry from Athens.  It seemed only right that my first trip to Greece should see me go to an island or so, and considering how late I woke up, Aegina was pretty much my only option left for the day.  Far from a regrettable one, however!

Leaving Aegina port from the ferry, I headed straight along the waterfront, as I could see some kind of open-air archaeological museum.  I did accidentally take a wrong turn (ie refused to walk on the clearly signed path as usual), so wound up having to climb a small cliff and jump over a fence, but hey.  Results, right?

Aegina, and Greece in general, really surprised me.  I remember when studying Thucydides and the Peloponnesian Wars, our teacher drilled in to us over and over again that Greek terrain is inhospitable, rocky and spiny.  Thus the sheer profusion of wildflowers pretty much had me gob-smacked.  They were stunning!

I went for a wander around the ruins and mini-museum.  Stopping to take a photo of an old column, I couldn’t help but think that the view from the mountains in the background wouldn’t be too bad. You can probably imagine what happened next.

Not knowing where I was going (other than ‘up’), I set off.  I bypassed Aegina town, overheating rather rapidly as I started climbing past vineyards to the somewhat obtrusive soundtrack of guys beeping me from their motorbikes.  It’s probably also worth mentioning that I was wearing knee-high lined winter boots, because hey, practicality.

After an hour or so of slow but unvarying uphill, the landscape started to open somewhat.  I was following a road winding up through the mountains, and the flower-covered slopes were almost able to distract me from my thoughts of ‘is this impulsive or idiotic?’.

I stopped for a little while by a tiny village with a spectacular church, and hung out in a field of flowers.  Some goats then appeared, scaring the heck out of me.  It took me a little while to convince myself that goats didn’t eat people, and I probably wasn’t about to die a grisly goat-based death.  Then it was off up the road once more.

I’d gone well past the original peaks by this point, and was looking for a way to get up to the ridge-line properly.  Walking up the switch-back road, which was littered with shrines and flowers (deja vu?), I finally found what I was looking for.  At the top of the hill, I stopped to check out a little church—an omnipresent feature of the Greek landscape.  I then saw a small path leading to a church further up, and finally in the direction I actually wanted to head in.

By this time I’d unzipped my boots down to my ankles, and was making some fairly distinctive thwack-thwack noises as I was walking.  No ninja skills here!  After the second little church, I walked past a few very scenically-placed graves, and then the track ended.  Time to improvise!

I followed goat trails for the first little bit.  I made a couple of stops for photos (also, to stave off the seemingly inevitable heat exhaustion), then aspied myself a very tempting-looking rock. ‘Oooh!’ I thought to myself.  ‘I should take photos from there‘.  Face palm.

I got closer to the gigantic boulder, which was around 10m high and perched on the very edge of a cliff dropping down a few hundred feet, only to find that it was actually split in half.  I couldn’t see any way to get on top, so decided that this would be an appropriate time to do some free-climbing.  I tied my camera into my top, zipped my boots up once more, and set myself to climbing up the channel between the two boulders.

There are things that could have improved this situation.  One would probably be better footwear.  Another would be an easier climb (I was doing it by jamming my back and shoulders against one side of the crack, and walking my legs up the other).  Lastly, perhaps if I hadn’t been doing all of this while directly over the aforementioned deadly drop, with nothing but a few hundred feet of air below me.  I had gone beyond ‘this is stupid’ and keeping my thoughts inside my head, and was chanting out loud, “oh my god oh my god oh my god i’m going to die i’m going to die i’m going to die”.  Eugh and then I had to change sides, so that I could get the top half of my body over a prickle bush and onto a ledge.  There were lunging actions involved.  Safety first, people!

Haha finally I was on top of this rock, super adrenaliny, and the view wasn’t that great.  Kind of a let down, really: but at least the way up was an adventure.  I then improvised my way down again and pushed my way through the thigh-high prickle bushes, to find myself at the top of the island.  See, the leather boots were good for something: namely, not getting prickled like that other time I improvised a hike in Greece.

Me sitting at the top 🙂

I made some new friends!

Huzzah, I made it!

From the top, I could see the town I’d come from far below me (I’d hiked around 14km so far).  I could also see the ferry terminal, and it occurred to me that the last ferry back to Athens was leaving in about two hours.  Helter-skelter, I set off once more.  A little bit past the village with the church which I’d previously stopped in, I realised it was time to start hitch-hiking.

Luckily, one of the first cars I saw stopped, and I got in with a lady who spoke reasonable English and her four small and very curious children.  “Did you like the temple?” she asked me.  Hmm, what temple was that then?  Apparently the ‘big deal’ on Aegina is an ancient temple to Artemis or some such.  Oops!  I apologised, saying I knew nothing about the island, and she looked at me like I was a thoroughly irresponsible human being, and asked what on earth I was doing there then.  I like to discover things I guess, not just see things I’ve already experienced through the eyes of others!  At the end she extracted a promise that I would at least eat some pistachios, because Aegina had the infamously best pistachios in the world.

The lady dropped me off near the dock, and I now magically had some time up my sleeve.  I had a quick browse through the seafront stores, buying a donkey for my current flatmate Crystal.  The reason I bought it was that my eyes made a bit of a Freudian slip when reading ‘Aegina donkey’, and it made me laugh so much I decided it had to come with me.  I’ve since bought her a collection of donkeys from around the world, including one from Colombia.  Oh Colombia.  My friend Laura told me when I was there about how men on the coast would have sex with donkeys.  ‘Noooooooooooo,’ I replied, not believing her.  She insisted—’no, really!  Men leave their wives for their donkeys!’.  Well, turns out there was something to it.  In some small towns, ‘pinning the tail on the donkey’, so to speak (heh heh) is a rite of passage.  There’s a documentary about it called ‘Donkey Love’, but I really recommend that you do not, do not, google that particular phrase.

Once I’d made my purchases, I was pretty much all out.  So I bought a kilo of pistachios (and haven’t been able to eat one since), sat by the dock, and watched the sunset.  Epic day.