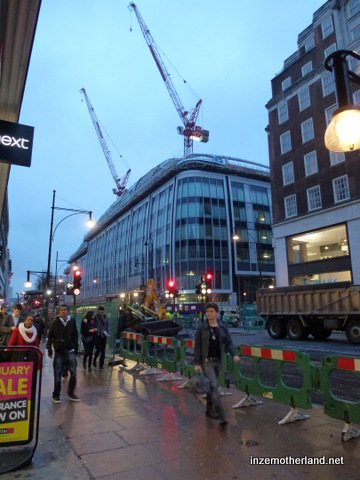 A'dam
Back to Blighty

My second day back in the UK was spent looking for boots.  Having size 43 feet is rather a challenge at times, and in fact all day, I found just three pairs of boots in my size.  Two were hideous, and the other cost $600.  But oh my god were they lovely.  Until I realised that that’s a new snowboard and bindings, and I couldn’t really justify the expense.

I met Tom for dinner after he finished class for the day, and then we trotted on home.  Well, tried to, anyway.  In the evening, the train back out to his house only runs every hour, and we just missed one, so had to wait an hour in the tube station.  We then started playing on the escalators (as all reasonable adults do) and, you guessed it, missed the next train.  Good form.  Man did I sleep well that night.

I spent the next day mainly in the area near Tom’s parents’ place, in Ware-Herts.

The following day was Australia Day, and my lovely friend Tilly came down from Liverpool for the day.  While waiting, I even got to listen to Triple J’s Hottest 100!  As it turns out, this was Tilly’s first trip to London.  Ever.  In her whole life.  Despite living less than 300km away!  So I gave her a tour 🙂

I was actually leaving for Amsterdam that night, on the overnight ferry.  So, naturally, I decided to put washing on that morning, and cart my wet things around with me.  Mm, mould—nom nom!

I met Tilly at the station (eventually—we couldn’t find each other for ever!) and dumped my wet things (and baggage) at a laundry before heading straight for one of my favourite places in London: the British Museum.  I’m pretty solid on my ancient and classical history, so gave Tilly a tour of the ground floor.  I love it!  Next we went for a bit of a walk.

Sadly, Tilly had to go back to Scouseland, and I had to head off to Harwich to catch the ferry.  It’s my preferred way of getting to Europe from the UK: it’s cheap, super-comfortable, and how awesome is waking up in a different country?  Also, boats.

A'dam
Back to Blighty